Before you quit, may I help you?

Kindly give us your requirement and our travel expert will help you to plan your tour.

Fill the form below for more details about itinerary, price and date availability.

There are few journeys in the world which encompass the best of both man-made marvels and the wonders of nature. The Palace on Wheels has a distinction of doing just that. Embark on the royal journey which covers the splendid structures, monuments, classic towns, forts, palaces, mansions, havelis, and the wilderness of jungles and romance of the deserts. The majestic ride will take you to the ravishing land of Indian state of Rajasthan where you'll visit the bustling cities of Jaipur, Udaipur, Jaisalmer, Chittorgarh, Jodhpur, Sawai Madhopur, Bharatpur and culminate your journey at Agra visiting the elegant Taj Mahal. Welcome aboard the Palace on Wheels and discover the royalty on the go.

The train derives its name from the royal background of its coaches which were originally meant for the travel of the erstwhile rulers of the states of Gujarat, Rajputana and Nizam, as also the Viceroy of India. As the coaches were very opulent and richly traditional, they were not being used by Indian Railways post-independence. The Rajasthan Tourism Development Corporation in conjunction with the Indian Railways conceived the idea of luxury train travel and it was in 1982 when the maiden tour of Palace on Wheels was flagged off. In 1984 a new meter gauge was introduced for the Palace on Wheels and the train had 13 saloons with 4 service coaches. In order to further enhance and modernize the amenities on the train, in 1996, a new train was constructed with broad gauge conversion with 14 saloons. 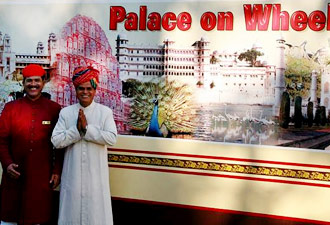 The train with 14 plush coaches is adorned with period furnishings to transport you in the world of royalty mixing them with the modern-day state-of-the-art amenities onboard. The coaches are named after erstwhile Rajput states namely - Kota, Jaipur, Udaipur, Jaisalmer, Bikaner, Alwar, Sirohi, Kishangarh, Bundi, Dungarpur, Bharatpur, Jhalawar and Dholpur - each evoking the memories of royal realms. The period furniture, classic paintings, wall fixtures, colorful drapery, wall-to-wall carpeting, well stocked bar, and dining cars (Maharaja and Maharani) - all make the Palace a heaven on earth.

The very personalized service in the majestic setting is sure to put the guests on a pedestal. No wonder, the train with its 25 years of service has been rated among world's top ten luxury trains.

With all things taken care of including boarding, accommodation, organized sightseeing tours as well as shopping, there is nothing a guest has to worry about. Find yourself lost in the splendor and elegance and seep yourself in the history of the land, take in its spectacular scenery, and savor the lifestyle of an emperor. Welcome aboard, your majesty!

Life on Board
Explore